Have you felt the need to take care of the environment?

Are you interested in learning more about the animals of the West Coast of America?

Then you should definitely check out the Oregon Coast Aquarium. From family fun to educational programs for tweens and teens to volunteer programs for the community, this aquarium has something for everyone.

About the Oregon Coast Aquarium

Located in Newport, Oregon, this aquarium is a non-profit organization dedicated to creating new and engaging experiences that connect you to the Oregon coast and inspire ocean conservation in you. The Oregon Coast Aquarium is an accredited member of the Association of Zoos and Aquariums. The aquarium’s vision is to invite you to partake in the mysteries of oceanic life.

The aquarium also prides itself on being a “living classroom” that welcomes all learning styles and ages. It is one of Oregon’s top tourist destinations and an important educational resource of
marine life, with over 40,000 students in the region visiting the aquarium each year.

Exhibits: What You Can See

With exhibits ranging from those you can touch and hear to those you can see and explore, you are sure to find your favorite exhibits at the Oregon Coast Aquarium. 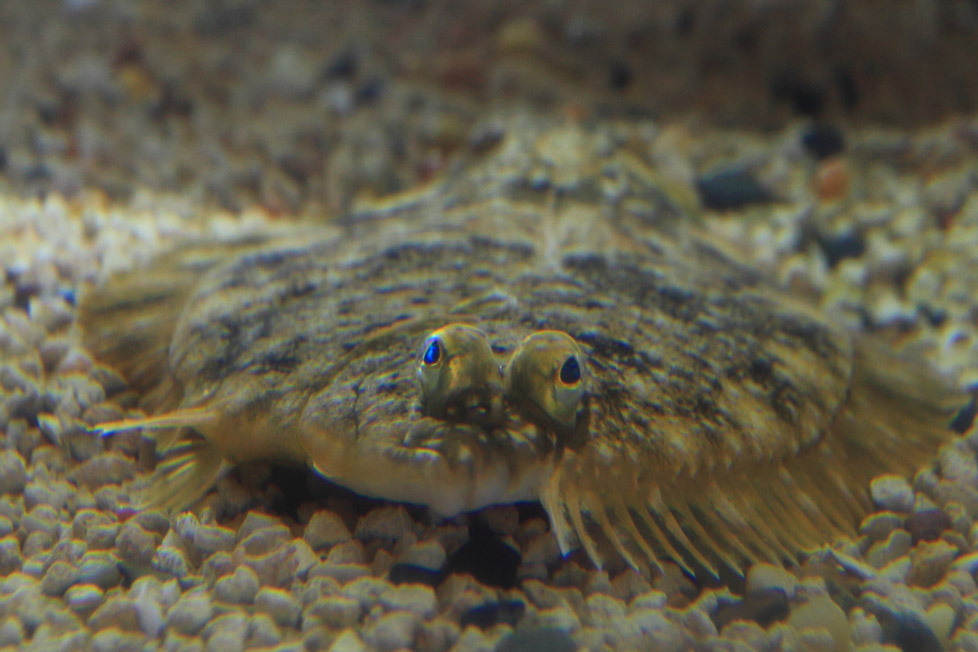 In this exhibit, aquarium staff have replicated the unique habitat formed at docks and piers where anemones and mussels cling to human-made structures and Dungeness Crabs dwell along the ocean’s seabed. The freestanding pier pilings exhibit lies in a 4,730-gallon tank.

Not too far from this exhibit is another exhibit that imitates the ebb and flow of the surf inside a tide pool filled with anemones, sculpins, and oysters.

The OCEAN TODAY kiosk provides a close real-time update on weather and conservation issues from across the globe thanks to the National Oceanic and Atmospheric Administration (NOAA) through the mediums of videos and interactive programs. The kiosk also has a feature called “Oregon Today,” which displays information about the region’s marine life, beaches and coastal waters. 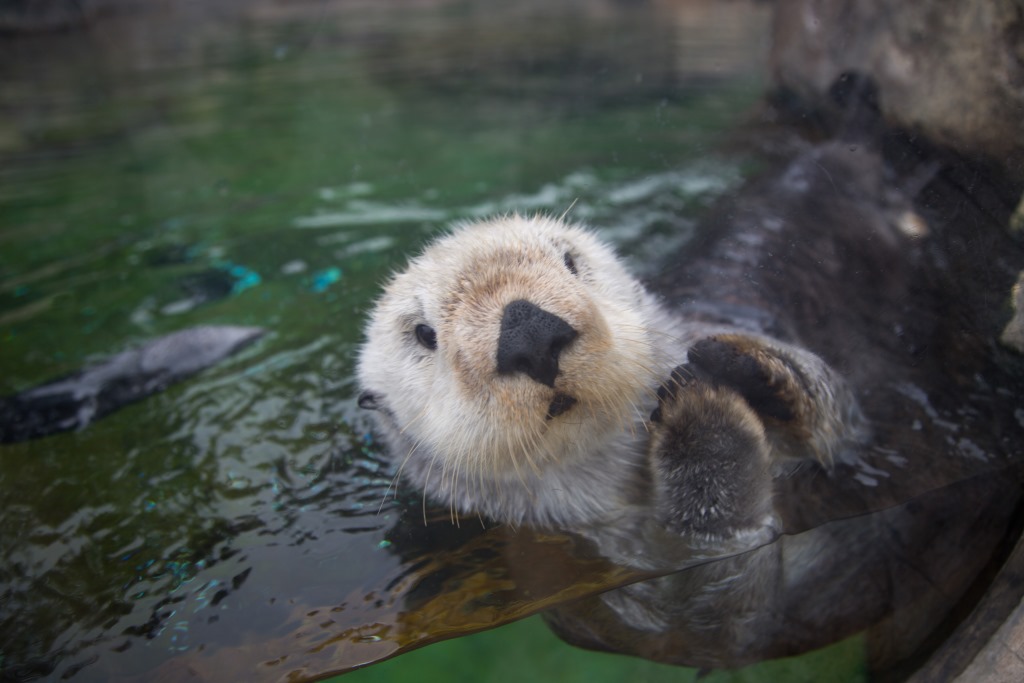 It’s not too much of a mystery who you’ll find here. None other than the Northern and Southern Sea Otters.

Wrap your head around this one: You’ll be looking at the largest population of sea otters in the state of Oregon when looking at this exhibit. Just over a century ago in 1907, these critters were hunted to the point of near-extinction. Explorers Meriwether Lewis and William Clark would trade otter skins as a viable income source, which also provided very good insulation.

The decline of the Sea Otters, however, led to a high population of sea urchins, which previously the Sea Otter would control. These sea urchins have nearly destroyed the many forests and habitats that exist underwater.

They may not be everyone’s favorite creature because of their alien-like appearance, but these octopi sure are legendary.

The Giant Pacific Octopus is an important oceanic predator. Because of their soft bodies, this predator can sneak in and out of the tightest of crevices with ease. Using the ink from their tentacles to blind their prey, octopi then finish them off with their venomous, parrot-like beaks.

These are quite intelligent creatures, with recent studies demonstrating the animal’s ability to use simple tools, identify individuals and objects, navigate mazes and access both short- and long-term memories. Not to mention they can also predict the winner of a European football match such as the late German octopus called Paul.

One of the largest octopi in this exhibit weighs about 600lbs. You can find these animals slinking along the west coast of America from southern California to Alaska. 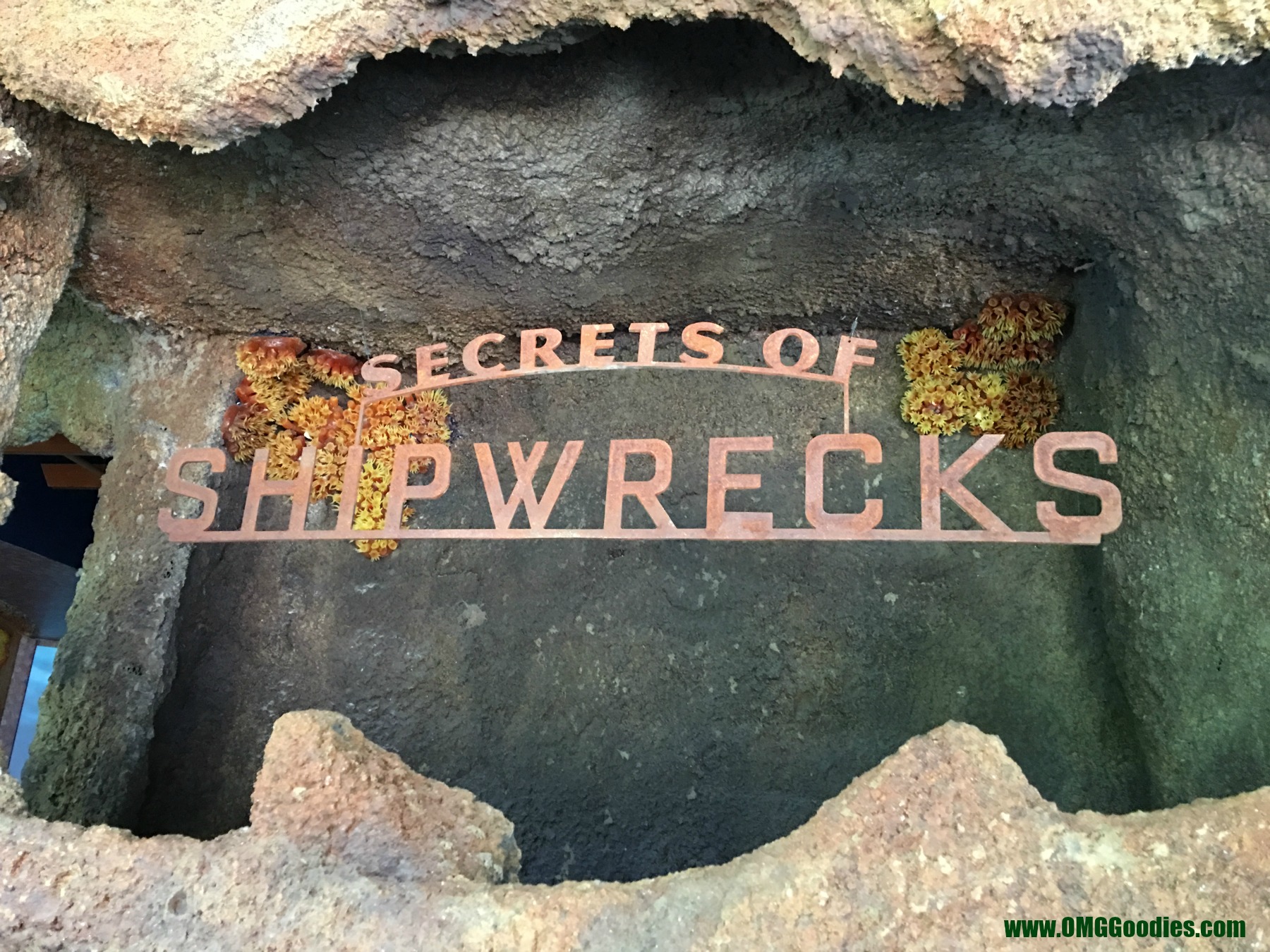 In this exhibit, the Oregon Coast Aquarium pays homage to shipwreck explorers, or underwater archaeologists. In this four-gallery underwater exhibit, you’ll read about and see the replicas of real artifacts that shipwreck explorers have found from waters such as the Red Sea and the Caribbean. You’ll also learn about the science and technology that these explorers and crew ship mates use to recover these historical finds.

In this interactive exhibit, you’ll also meet a giant, smiling green moray eel that is native to the west coastal waters. 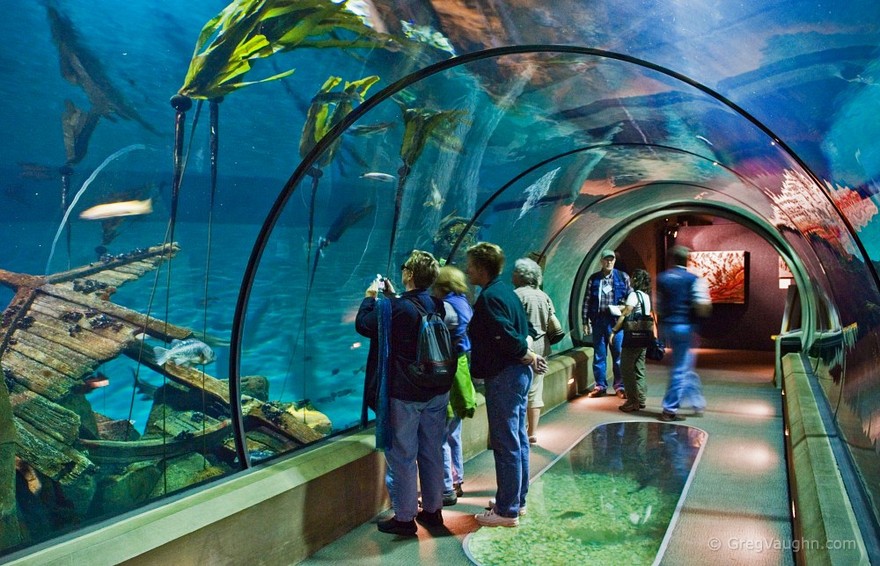 In the aquarium’s Passages of the Deep exhibit, you’ll have the chance to immerse yourself in the oceanic world right off the Oregon coast. An underwater walkway will lead you through the canyons of Orford Reef on through to the Halibut Flats exhibit and finally the Open Sea exhibit. Most of the animals you’ll find in this exhibit thrive in the upper strata of water known as the Sunlit Zone.

You’ll find animals such as Spiny Dogfish Shark, Kelp Greenling, and Vermilion Rockfish. The sharks are a fan favorite in this exhibit.

Educational Programs: What You Can Learn

Whether going on a field trip from school or bringing your family along for an adventure, the Oregon Coast Aquarium provides a variety of educational programs to inspire curiosity about the ocean deep.

Specially designed for 3-5-year-old children accompanied with an adult, the Aquatots program allows preschoolers to explore the oceanic wonders through arts and crafts. An aquarium educator leads activities that revolve around a specific theme that changes on a monthly basis. The program is free with admission and registration is not necessary. Programs occur on the 2nd Wednesday of the month at 10:30am. 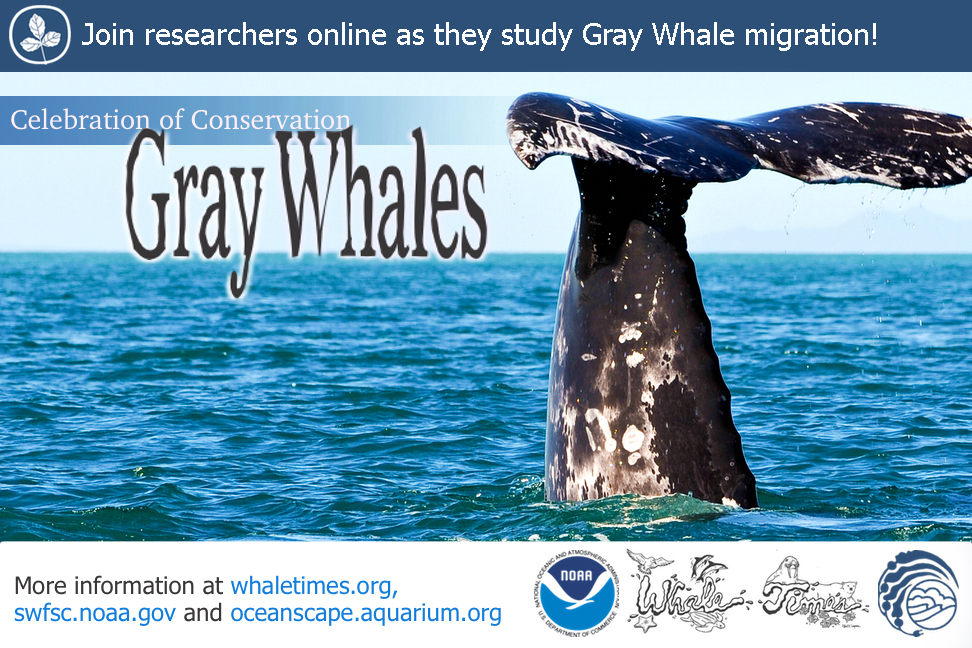 The Oregon Coast Aquarium also provides an online educational program designed to connect preteens and teens to science, nature, and outdoor experiences. You’ll have the opportunity to explore the Oregon Coast by geographical location or major ecosystems — visiting landmarks, submitting sightings of wild animals or using a GPS for exploration of natural areas. You’ll experience the coast firsthand.

Of course, for middle and high school students, this network is perfect for completing projects on scientific inquiry. Teachers will have the ability to create online student communities and supervise students’ progressions in their projects. Oregon students who  complete the online program may also fulfill a requirement for high school graduation.

The Oregon Coast Aquarium is also a supporter of the Ditch the Straw program, which calls for the elimination of single-use plastic straws. Plastic straws and stirrers are the seventh most commonly found items in beach cleanups and can be harmful to animals’ digestive tracts when swallowed as straws are not biodegradable.

When you order your drink, kindly refuse a plastic straw, thereby contributing in a small way to the program. Businesses offering straws upon request have reduced straw consumption by 40%-60%.

​​Sleep in the Deep 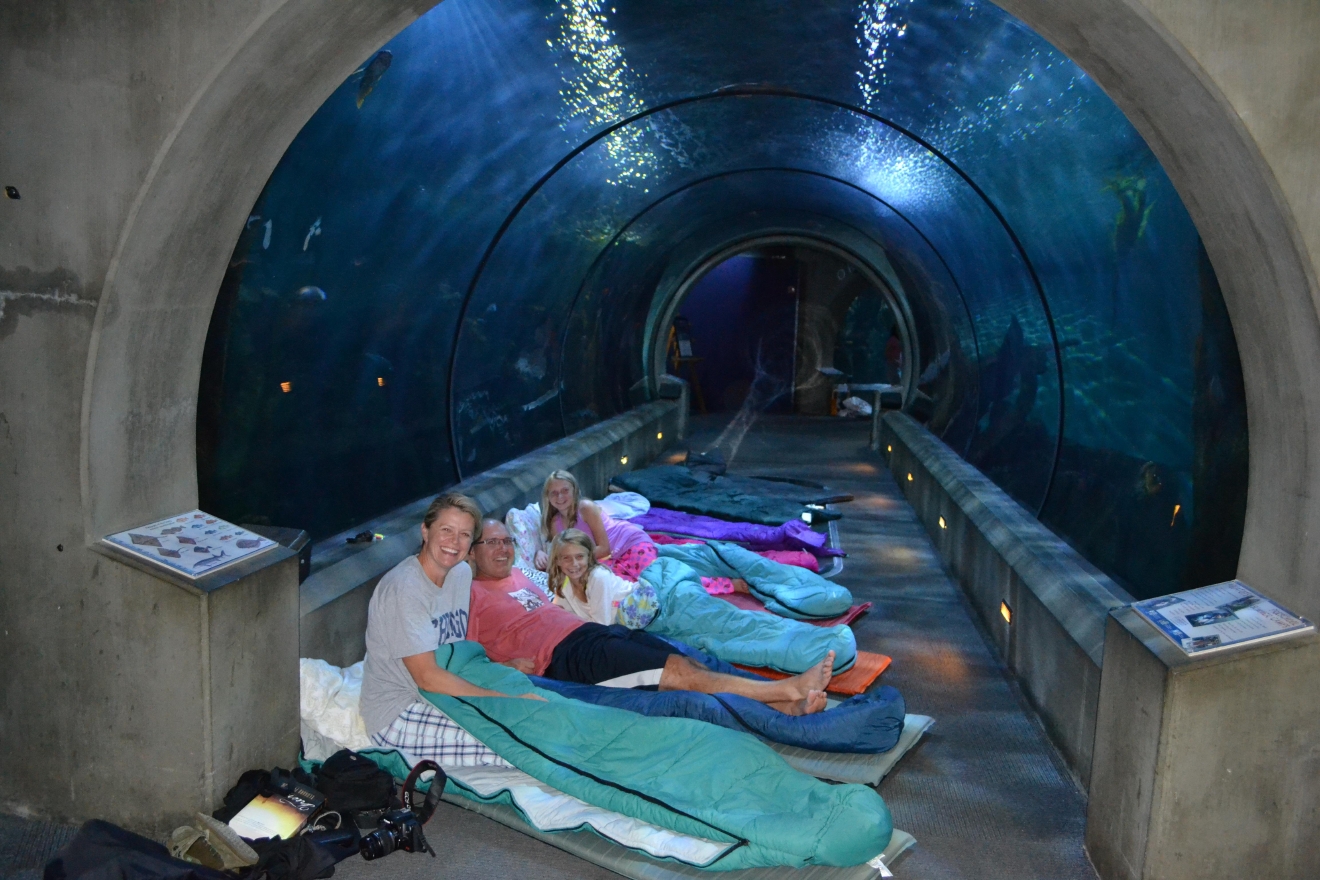 In either a public or private group, the Oregon Coast Aquarium allows small groups, families, and individuals to sleepover underneath the Passages of the Deep exhibit’s 360-degree tunnels. The tunnels can host 25-30 occupants in the Open Sea tunnel, 15 occupants in the Halibut Flats tunnel and 15 in the Orford Reef tunnel.

You’ll need to make a reservation and register at least 2 weeks prior to an event. If you don’t have a big enough group for a private event, you can try your luck at the public-combo events.

Special Activities: What You Can Do

With the interactive programs that the Oregon Coast Aquarium offers, the aquarium shows time and again that it is more than just an aquarium for tourists to visit.

Because of a combination of El Niño storms and a large mass of relatively warm water known as “the blob,” ocean marine life was greatly affected. Sea turtles particularly were thrown off course, being stranded in the Pacific Northwest waters. Two turtles, Solstice and Lightning, managed to weather and Wildlife Service, the NOAA and SeaWorld San Diego, the turtles were recovered and brought back to ocean life.

As a Hubbs-SeaWorld Research Institute Senior Research Scientist, Dr. Brent Stewart suited the turtles with special satellite transmitters to track their movements. Today, you can track the movements of Solstice and Lightning on the Aquarium’s official website. 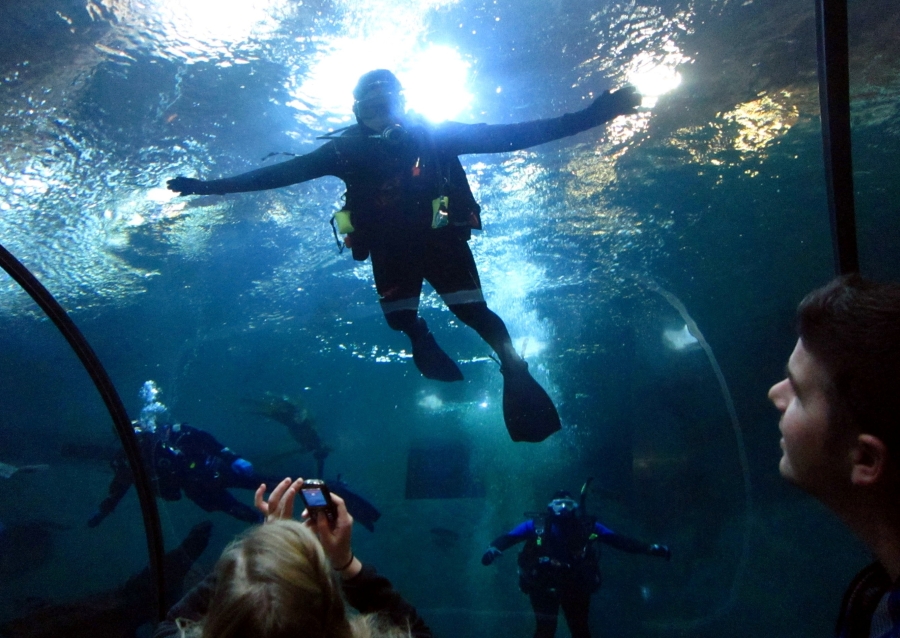 With professionally trained Aquarium Dive Guides, you’ll be able to dive either in the 26-foot-deep Halibut Flats or Open Sea exhibits. Your dive experience includes other perks:

In partnership with the nonprofit organization SOLVE, the Oregon Coast Aquarium also hosts various beach clean-up events open to the public to help improve the marine environment in Oregon. SOLVE is a nonprofit organization dedicated to improving the environment and building a valuable legacy of stewardship in the community. Organizations such as Friends of Riverplace, Northwest District Association and NW Portland Hostelhost a variety of volunteering events on the website.

Whether you are a middle or high school student, have a family or simply have an interest in all things marine life, don’t hesitate to check out this aquarium.

Not only will you have a fun experience at the aquarium, you’ll learn something at the time.

It’s a memorable experience for all ages.